Along with performance testing, there were 2 other themes that continually came up in conversations during STAR Canada.

While there are thousands of articles about Continuous Testing, and hundreds of thousands on Agile, there seems little on both. Perhaps due to some apparent conflicts.

Lets look at a theoretical QA in an agile environment. Say your organization Sprints are 2 weeks in length, each scrum having 8-10 members for manageability. Due to project time constraints,  there are 5 scrums working concurrently, each focussed on a different component of development of your application. What test cycles are done as part of the sprint and what cycles are done outside or as cross functional teams? 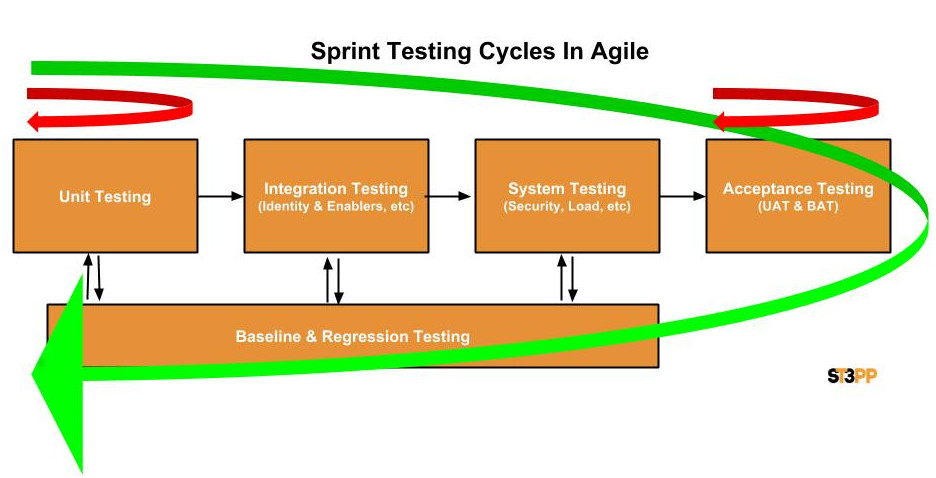 It was pointed out that although common, doing only unit tests and integration testing on your Sprints code, then jumping to acceptance testing of that sprint, is not Agile. Agile should in fact have all test stages built into the Sprint. Many companies ignore various test cycles like load, integration and security testing of the end to end system as there simply is not time in each Sprint.

An alternate approach is to created independent teams outside of the Agile development. Their role is to test integration, load, security and systems in integrated environments. Defects identified are then fed back into the scrum meetings and allocated to particular Sprint. This also is not really Agile, falling into some kind of hybrid. The challenge here is that issues are often identified after sprints are finished and so not really continuous testing either.

Continuous Testing is somewhat the same as Baseline and Regression Testing, but need not only testing against a Baseline. Its about continually testing while developing through the entire SDLC. The benefit that issues can be identified far earlier (Shift Left approach) resulting in lower costs to address. Agile environments at first glance, seem to favour continuous testing, but does that include, regression, integration and systems testing across Sprints? If each test case takes 9 minutes to complete, 1 tester can only run 53 test cases in a day or 533 tests in a Sprint. This is simply not enough coverage to test all systems and other tests continuously. The result, is partial or low test coverage.

If as part of each Sprint, a fully developed set of test cases are developed by each Sprint in the same application (eg SOAPSonar) covering their development efforts. The incremental work to role these up into test cases for integration, load etc would be minimal. Each sprint then shares a set of Integration, performance, load and regression etc tests that they simply run as part of their sprint. Being automated, these can even run after hours. The result is continuous testing of both at the Systems level and the Sprint level, without the heavy resource requirements of manual testing. issues be the system wide, or sprint level can then be addressed in Sprint.

The concern with this is the same as with any automation project, “Will The Development of the Automation Scripts Not Take More Time than the Resulting Benefit.” This is a tool selection question. Finding the right tool for your team to use to minimize the time taken developing and maintaining various test cases from function through load and regression, to acceptance testing.

Would you like to weigh in with your thoughts or comments on the subject?